UPDATE: Starting in NServiceBus version 7.4 you can create a new ConversationId using sendOptions.StartNewConversation(). No more need to create a custom pipeline behavior as I explain here.

The purpose of the ConversationId header included with every NServiceBus message is to relate a whole bunch of messages together as all having started from the same action. It’s generally a very bad idea to mess with the ConversationId in a message handler, so if you try, you’ll get this exception:

But there are some times when it might be a good idea to override this id, if you know what you’re doing. This article shows you how to do that.

When you click in a web application (for example) a message gets sent. This is the very first message in the “conversation” so a new ConversationId is generated. From that point on, every message that is sent as a result of that original message (from message handlers sending or publishing still more messages) copies the same ConversationId from the incoming message.

When these messages get successfuly processed, we can send a copy of them to an auditing store, like ServiceControl.

Then ServiceInsight can query our auditing store for messages having the same ConversationId, and with that information build a flow diagram like this: 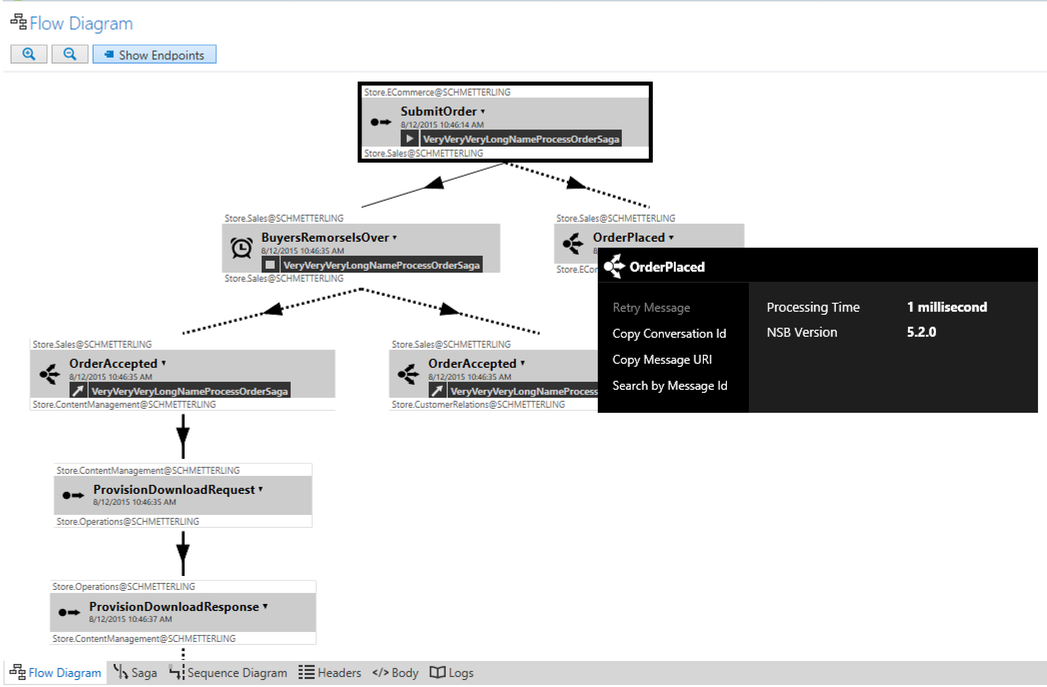 The problem is when you use a never-ending saga, something like the CustomerHasBecomePreferred saga I wrote about in Death to the batch job, or the sample scheduler saga I wrote in my last post. There’s never an event to say “This is the start of a new conversation, please come up with a new ID.”

If you try to look at a saga like this using ServiceInsight, the diagrams would get larger and more complex the longer the saga lived, and it wouldn’t take long for the diagrams to become completely unusable.

Let’s take another look at the exception if we try to change the ConversationId within a message handler. This time I’ll include a couple lines from the stack trace.

I include the first couple lines of the stack trace because that’s a clue for how to get around this quandary. Specifically, the AttachCausationHeadersBehavior where the method takes an IOutgoingLogicalMessageContext.

This is a pipeline behavior, one of many built into NServiceBus that do things to messages as they’re either processed (incoming behaviors) or sent out (outgoing behaviors).

In this case, IOutgoingLogicalMessageContext tells us that we’re operating on the part of the outgoing message pipeline where we have a logical message—in other words, we’re still dealing with a class and haven’t serialized the message to bytes to send to the message transport yet.

We can operate later in the pipeline by creating our own behavior operating on the IOutgoingPhysicalMessageContext.

We also have to register this new pipeline behavior when we configure the endpoint containing the scheduler saga:

Now, from wherever point you want to cut the conversation into two (in my scheduler saga, it’s the point where the scheduler fires off a new execution of the task) you can do this:

When intercepted by the behavior the value stored in the OverrideHeader will override the value copied from the previous message in the chain, effectively starting a brand new conversation.

Overriding ConversationId isn’t something to be done lightly, as you can break your auditing and message visualizations. That’s why the NServiceBus API tries to prevent you from doing it. But with a framework as extensible as NServiceBus, there’s almost always a way to break the rules, and pipeline behaviors are a common outlet for well-meaning rule-breakers to do just about anything you can dream up.

For more on useful behaviors, you might want to check out my post Infrastructure soup on the Particular Software blog.