Last week in our development team meeting we had a discussion about QR Codes and whether or not there was a good reason to include QR reader functionality in future products.

For those unfamiliar, the short version (stolen from the Wikipedia linked above):

A QR Code is a matrix code (or two-dimensional bar code) created by Japanese corporation Denso-Wave in 1994. The “QR” is derived from “Quick Response”, as the creator intended the code to allow its contents to be decoded at high speed.

My personal opinion, which I espoused during that meeting, was that QR codes are, for lack of a better word, stupid, that they would never appear in anything mainstream, had no potential return on investment, and that generally they were a complete and utter waste of time and we should go out of our way to avoid allocating any development time toward it.

And so what do I see in the Sunday paper just a few days later? Best Buy included a QR code on the front page of their Sunday ad. Thanks Best Buy. Big help.

My typical admiration for Best Buy and all the things they have to sell me aside, I’m sticking with my opinion. 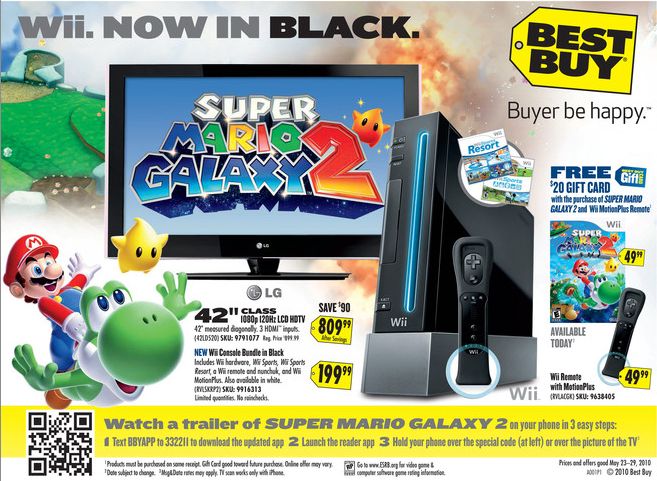 In order to use this thing, here’s what you have to do:

If that sounds hopelessly complicated, that’s because it is. This could have been accomplished by asking the user to visit bestbuy.com/mario (not a real link).

This fails a pretty simple metric I have for evaluating new software and technology. If it feels cumbersome and overcomplicated to me, a software developer and self-proclaimed uber-geek, then it can never find general acceptance among the masses?

Of course, this isn’t a perfect use of QR Code technology. QR codes should follow the Three Rules of QR Codes. Briefly, they must 1) have a good mobile-device-appropriate landing page, 2) have a tiny url, and 3) lead to something valuable. This Sunday ad doesn’t outright fail, but doesn’t exactly achieve stellar marks on #1 or #3. The landing page is somewhat mobile ready, but should be able to tell iPhone and Android apart, and have some option for other devices. More at issue is Rule 3 - a video is not all that valuable. Offer me 10% off Super Mario Galaxy 2 and then maybe we have something to discuss.

To be fair, Best Buy is improving; previously they hung a QR code in a storefront window in New York City and this was an even bigger affront to Rule 3: it was only a link to the Best Buy mobile website.

So I maintain that QR codes will not catch on, because they can never reach the mainstream. They are a digital chicken and the egg paradox.